Inspecting a complex site is not a simple task. In theory, though, it is: Take some birds-eye (“top-down”) images above the structure, some sideways (“oblique”) images by flying in a circle around it, and you’re set. In practice, it turns out this way only if you are inspecting a candle-shaped structure in a flat open field, like a lighthouse out at sea.

In contrast, the vast majority of inspection tasks involve structures with a complex shape, surrounded by obstacles. There are often further restrictions on the flight altitude, no-fly zones etc. They sometimes don’t even stand on a straight ground. In the presence of any of the above complications, today’s typical inspection workflow reduces to either error prone manual flight or tedious waypoint-placing based semi-automatic mission planning. Both ways, the process is slow, inaccurate and not easily reproducible.

How would an ideal tool for accurate inspections of this complex kind look like? It should be one that requires nothing but the shape of the structure to be inspected, the surrounding objects (obstacles) and the important high-level mission parameters, and computes a pinpoint accurate and optimized plan covering every corner of the structure, following its curves and contours, and avoiding all obstacles. It should then allow to easily adjust any part of the plan, visualize the resulting images before even connecting the drone and allow to fly all or any part of the plan, any number of times. This is exactly how Site Scans of Drone Harmony’s Mission Planner work.

A site scan is composed of three types of flight plans: 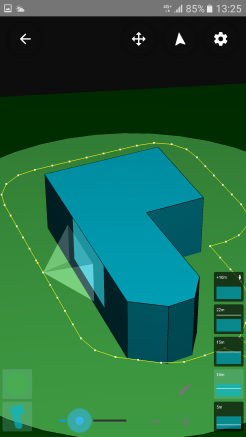 The above example already illustrates how Drone Harmony’s site scan considers two important real-life constraints: the need to capture the structure from all sides and angles and the need to follow it’s contour. Site scan offers, however, much more than that: they achieve the latter goals optimizing flight time, accurately respecting user-defined parameters (overlaps, minimum flight altitude etc.) and avoiding all obstacles in the scene. Here is how.

As with all other automatically generated Drone Harmony scans, a site scan can be generated for any complex scene, which represents not only the objects you would like to scan, but also all obstacles that are relevant to your flight: trees, buildings, no fly zones etc. (For an introduction to Drone Harmony’s scene-centered workflow see the blog post: Scene-centered planning: The powerful workflow of Drone Harmony’s flight planner app).

Once the scene is defined, a site scan can be generated. You will need to choose one structure in the scene as the inspected structure. All other structures will automatically be considered as obstacles. All plans comprising a site scan are combined carefully together to suit the defined scene and to respect the chosen parameters. Default parameters are also automatically chosen to suit the dimensions of the structure, but as always, they can be adjusted in any way. In fact, the only parameter you need to provide is the camera (or drone) profile. For an explanation of all parameters that you can tune to generate the perfect site scan see the Site Scan Overview page.

We conclude with a few more elaborate examples of site scans, containing obstacles. In all cases, the scene has been defined and a site scan has been generated. 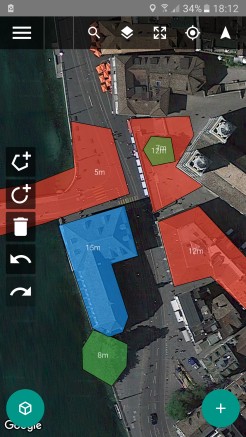 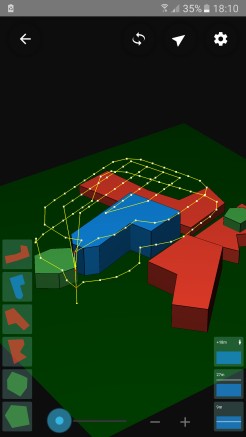 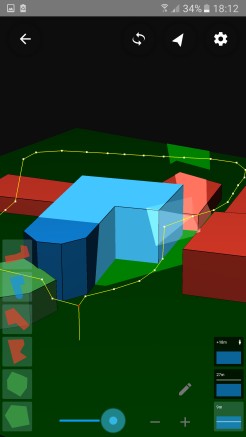 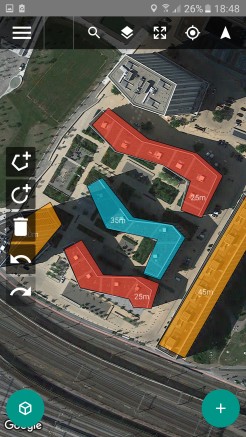 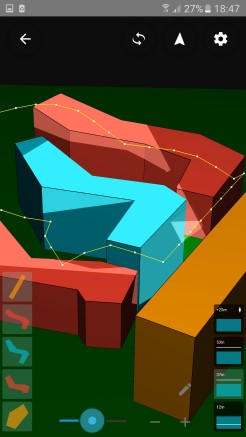 Site scans can even be used to scan compound structures, composed of several volumes: Simply generate a site scan for each volume.

What’s in store for the future? We intend to make our site scan even more powerful. For starters, it will be possible to generate a site scan for compound structures: structures that are composed of several volumes, as well as parts of a structure, such a facade of a building. Site scans will consider ground elevations to further improve accuracy in hilly areas. Furthermore, there will be options to fly several parts of a site scan (e.g. the top down scan and some of the perimeter scans) in succession, without the need to start each part separately,  and more. Stay tuned.